Despite how busy July was, I managed to read twenty-one books and micro-chapbooks. Reading helps me mellow out when I’m stressed, and I was pretty stressed this month, so it doesn’t surprise me how voraciously I read. I’m also beta reading a novel for a writer that I deeply admire and I can’t wait for that book to be released into the world. What have you read lately that’s gotten you excited?

Now for the feedback. The following reviews will cover what worked well in the books. If you wish to discuss what didn’t work in the books or what you enjoyed about the books, then I’d encourage you to comment on this post.

Without further ado, here are the mini-reviews for this month. (Mild spoilers may follow.)

I first read Train Dreams during a class I took at Creighton University. I was surprised by how much I disliked the book and wanted to give it another chance by reading it again. While my boredom was not completely alleviated with the second read, I did manage to find some things I enjoyed about the novella.

Denis Johnson‘s Train Dreams is an epic in miniature, one of his most evocative and poignant fictions. It is the story of Robert Grainier, a day laborer in the American West at the start of the twentieth century—an ordinary man in extraordinary times. Buffeted by the loss of his family, Grainer struggles to make sense of this strange new world. As his story unfolds, we witness both his shocking personal defeats and the radical changes that transform America in his lifetime. Suffused with the history and landscapes of the American West, this novella by the National Book Award-winning author of Tree of Smoke captures the disappearance of a distinctly American way of life.

Who should read Train Dreams:

I received a copy of Abridged Classics by John Atkinson from my best friend for my upcoming birthday. Honestly, it’s just a short and fun little joke book that I read in its entirety immediately after my friend gave it to me. I loved it.

A collection of irreverent summations of more than 100 well-known works of literature, from Anna Karenina to Wuthering Heights, cleverly described in the fewest words possible and accompanied with funny color illustrations.

Abridged Classics: Brief Summaries of Books You Were Supposed to Read but Probably Didn’t is packed with dozens of humorous super-condensed summations of some of the most famous works of literature from many of the world’s most revered authors, including William Shakespeare, Charles Dickens, Emily Brontë, Leo Tolstoy, Jane Austen, Mark Twain, J.R.R. Tolkien, Margaret Atwood, James Joyce, Plato, Ernest Hemingway, Dan Brown, Ayn Rand, and Herman Melville.

From “Old ladies convince a guy to ruin Scotland” (Macbeth) to “Everyone is sad. It snows.” (War and Peace), these clever, humorous synopses are sure to make book lovers smile.

Who should read Abridged Classics: 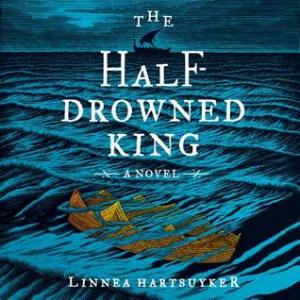 I listened to The Half-Drowned King by Linnea Hartsuyker on audiobook through OverDrive. The novel started out strong and then kind of disentegrated for me. Still, the interesting parts of the book are definitely worth talking about.

An exhilarating saga of the Vikings that conjures a brutal, superstitious, and thrilling ninth-century world and the birth of a kingdom—the debut installment in a historical literary trilogy that combines the bold imagination and sweeping narrative power of Game of Thrones, Vikings, and Outlander.

Centuries ago, in a blood-soaked land ruled by legendary gods and warring men, a prophecy foretold of a high king who would come to reign over all of the north. . . .

Ragnvald Eysteinsson, the son and grandson of kings, grew up believing that he would one day take his dead father’s place as chief of his family’s lands. But, sailing home from a raiding trip to Ireland, the young warrior is betrayed and left for dead by men in the pay of his greedy stepfather, Olaf. Rescued by a fisherman, Ragnvald is determined to have revenge for his stepfather’s betrayal, claim his birthright and the woman he loves, and rescue his beloved sister Svanhild. Opportunity may lie with Harald of Vestfold, the strong young Norse warrior rumored to be the prophesied king. Ragnvald pledges his sword to King Harald, a choice that will hold enormous consequence in the years to come.

While Ragnvald’s duty is to fight—and even die—for his honor, Svanhild must make an advantageous marriage, though her adventurous spirit yearns to see the world. Her stepfather, Olaf, has arranged a husband for her—a hard old man she neither loves nor desires. When the chance to escape Olaf’s cruelty comes at the hands of her brother’s arch rival, the shrewd young woman is forced to make a heartbreaking choice: family or freedom.

Set in a mystical and violent world defined by honor, loyalty, deceit, passion, and courage, The Half-Drowned King is an electrifying adventure that breathtakingly illuminates the Viking world and the birth of Scandinavia.

Who should read The Half-Drowned King:

I bought Land of Love and Drowning by Tiphanie Yanique a while ago. It sat for far too long in my to-be-read pile before I finally picked it up. I’m so incredibly happy to have read a novel about the U. S. Virgin Islands, a place that almost never appears in the fiction I read.

A critically acclaimed debut from an award-winning writer—an epic family saga set against the magic and the rhythms of the Virgin Islands.

In the early 1900s, the Virgin Islands are transferred from Danish to American rule, and an important ship sinks into the Caribbean Sea. Orphaned by the shipwreck are two sisters and their half brother, now faced with an uncertain identity and future. Each of them is unusually beautiful, and each is in possession of a particular magic that will either sink or save them.

Chronicling three generations of an island family from 1916 to the 1970s, Land of Love and Drowning is a novel of love and magic, set against the emergence of Saint Thomas into the modern world. Uniquely imagined, with echoes of Toni Morrison, Gabriel García Márquez, and the author’s own Caribbean family history, the story is told in a language and rhythm that evoke an entire world and way of life and love. Following the Bradshaw family through sixty years of fathers and daughters, mothers and sons, love affairs, curses, magical gifts, loyalties, births, deaths, and triumphs, Land of Love and Drowning is a gorgeous, vibrant debut by an exciting, prizewinning young writer.

Who should read Land of Love and Drowning:

Of course I had to read another Two Dollar Radio book this month. This time I chose The Blurry Years by Eleanor Kriseman. All I can say is wow; this book left me conflicted in all the right ways.

The Blurry Years is a powerful and unorthodox coming-of-age story from an assured new literary voice, featuring a stirringly twisted mother-daughter relationship, set against the sleazy, vividly-drawn backdrop of late-seventies and early-eighties Florida.

Callie—who ages from six to eighteen over the course of the book—leads a scattered childhood, moving from cars to strangers’ houses to the sand-dusted apartments of the tourist towns that litter the Florida coastline.

Callie’s is a story about what it’s like to grow up too fast and absorb too much, to watch adults behaving badly; what it’s like to be simultaneously in thrall to and terrified of the mother who is the only family you’ve ever known, who moves you from town to town to leave her own mistakes behind.

With precision and poetry, Kriseman’s moving tale of a young girl struggling to find her way in the world is potent, and, ultimately, triumphant.

Who should read The Blurry Years:

I chose to listen to the audiobook of The Gunners by Rebecca Kauffman after I saw it appear on my OverDrive app. Frankly, I think the book’s structure, conflicts, and characters are messy, but there were a lot of good things about the novel too.

Following on her wonderfully received first novel, Another Place You’ve Never Been, called “mesmerizing,” “powerful,” and “gorgeous,” by critics all over the country, Rebecca Kauffman returns with Mikey Callahan, a thirty-year-old who is suffering from the clouded vision of macular degeneration. He struggles to establish human connections—even his emotional life is a blur.

As the novel begins, he is reconnecting with “The Gunners,” his group of childhood friends, after one of their members has committed suicide. Sally had distanced herself from all of them before ending her life, and she died harboring secrets about the group and its individuals. Mikey especially needs to confront dark secrets about his own past and his father. How much of this darkness accounts for the emotional stupor Mikey is suffering from as he reaches his maturity? And can The Gunners, prompted by Sally’s death, find their way to a new day? The core of this adventure, made by Mikey, Alice, Lynn, Jimmy, and Sam, becomes a search for the core of truth, friendship, and forgiveness.

A quietly startling, beautiful book, The Gunners engages us with vividly unforgettable characters, and advances Rebecca Kauffman’s place as one of the most important young writers of her generation.

Who should read The Gunners:

I read micro-chapbooks #22 through #36 in the Ghost City Press Summer Micro-Chapbook Series. You can find all of the available ones here.

Also, Space, Collisions released this month! I hope you’ll check it out.

My mother-in-law mailed this to me so I could read it. 💕 . . . #nonfiction #empoweringwomen #MelindaGates #book #bookstagram
Thank you @allegoryridge for the lovely anthology and three issues of the magazine! I will cherish them. . . . #nature #city #world #art #writing #photography #self #design #society #nonfiction #fiction #poetry
Tonight’s reading . . . #bookstagram #book #amreading #fiction #historical #novel #Merlin #queen #twins #Pendragon #Britons #Romans
Follow A Vase of Wildflowers on WordPress.com